My love for Thai food is real, and tends to be my typical Sunday night carry-out choice. I switch between pad thai and pad see ew as my go-to’s, so I figured if I could make one of these dishes as good as the restaurant down the street, then my wallet would be very happy!

I followed this recipe from cooking classy because the pictures looked so good, and it was only a few steps. I started by boiling the water for the noodles, and during that time I mixed together the ingredients for the sauce: brown sugar, soy sauce, rice vinegar, lime juice and fish sauce.

With the water boiling and the sauce made, I added the noddles, and then started to cook my chicken. Once the chicken was finished cooking, I set it aside and cut it into small pieces. When the noodles finished cooking I drained them and set them aside.

With everything good to go, it was time to mix together my veggies and scrambled the eggs. I did not put peppers in my recipe like the recipe called and opted to put in broccoli, bean sprouts, carrots, and green onions for my veggies.

From the moment my noodles were finished cooking until the dish was plated, it was as if a tornado had gone through my kitchen. I did not have a wok so I thought using a 3-quart sauce pan would be the same… FYI that is not the same!

The veggies and eggs were already in the pan, so I added the rice noodles to the pan, which some may have been a little over cooked. When I went to add the chicken, I realized the pan was not large enough. Had to grab a second smaller sauce pan to move some of the noodles, chicken and veggies over. With everything split up I poured some of the sauce in each pan.

I tried to crisp up some of the noodles, but some of them ultimately came out super soggy while other were crispy.

The final product looked okay, and it did taste like pad thai, but some of the textures just weren’t there. I think if I had a wok or a larger sauce pan it would have made the noodles come out a little better, and the whole dish would have felt a little more authentic. 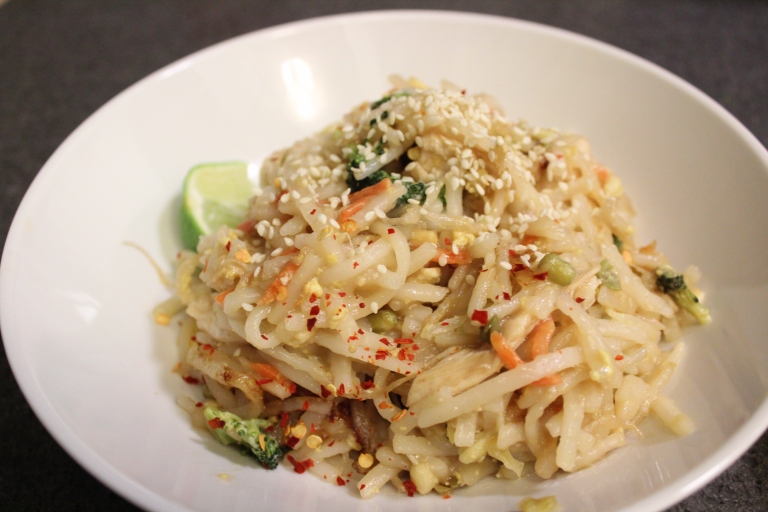 I sprinkled some chili flakes and a splash of lime on top to finish out the dish. This was truly a challenging dinner, and I was bummed that it didn’t come out exactly how I hoped.

I will definitely attempt again, once I manage to clean up all the vegetable oil from my stove, the floor and the walls… but for now I will leave this dish to the experts, and continue to get my carry out from the thai restaurant down the street.

Hi, I’m Racquel! My friends call me Rock and I'm a 29 year Head Chef of my household. I love to cook and love challenging myself to create tasty and fun dishes! Join me as I continue to learn my way around a kitchen, hopefully with minimal fires! View all posts by Racquel Segall

Let me know what you think! Cancel reply